skip to main | skip to sidebar

Saints, Santuaries, And The Blue Ghosts

I am often asked where the name for this Blog comes from. Well it is April, so it is time to tell.

Within everyone's reach is a world full of Saints and Sanctuaries, most of them undiscovered or more likely, unnoticed. A friend often reminds me that the "Powers That Be" place special gifts in the hands of special people--those people who pay close attention to the simple mystery and loveliness that eludes most people, most days. Don Lewis and Bennie Lee Sinclair are two such people, two Saints that were blessed with a Sanctuary, a love for nature's beauty, and an unselfish willingness to share it with others. Magic happens once a year in mid-April and it happens in a peaceful spot in Northwestern Greenville County in Cleveland SC. It is indeed a thing strange, beautiful, and full of wonder.


First, a little about the Saints. Bennie Lee Sinclair was born in Greenville SC and was a writer, and magnificent poet. She met Don Lewis while attending Furman University and they were married in 1958. In 1986 she was appointed to be South Carolina's 5th Poet Laureate, a position she held until her untimely death in 2000. She was a poet of the people, working to give the gift of poetry and creative writing to children and young adults in SC schools. Her poetry 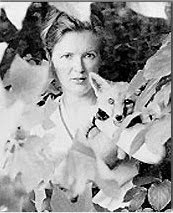 A photo of Bennie Lee Sinclair taken years ago by her husband, Don Lewis.
reflected her love and understanding for the little simple things-the things that often have the greatest meanings. Her poems' subjects included the local Goat Man and her observation of a poor family's home that she watched over time as it was slowly consumed in their fireplace for heat. Her work was strongly influenced by her love for Wildernesse, the 135 acre wildlife and plant sanctuary where she and her husband, Don Lewis, lived and created their art. She took care of the abandoned and injured animals in the area and loved her pet foxes. She won many literary awards and her book of poetry, Lord of Springs, was nominated for the Pulitzer Prize. 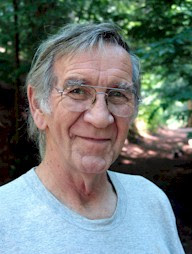 A fairly recent picture of Don Lewis
Don Lewis is a philosophy major, a freelance photographer, and Master Potter. He studied pottery at Marguerite Wildenhain's Pond Farm in Guerneville California in the 60's, and his beautiful pottery, which he still makes at his Wildwood Gallery on his property, has been featured in the Smithsonian. He has developed difficult and special pottery techniques in firing and color to create beautiful and unusual work. He is a one man show, but passes on his skills and special knowledge to student interns. Don could be described as a free and gentle spirit, a quiet, thoughtful philosopher, an unassuming storehouse of knowledge, and a careful observer who listens.
Don and Bennie Lee purchased apx. 135 wooded acres in rural Cleveland SC in 1970, moving there in 1975. This is when the magic was discovered. Don tells, "we moved here in the early spring, April of that year. A friend came to see us and he stayed until after dark. He left and then came right back to the door and said, 'you have got to come out here and see this.' There were the fireflies. I've been watching them ever since." But Don knew these were not your ordinary fireflies. They are an extremely rare species, Phausis reticulata, found in only a few small patches, most of them in the Appalachian area. Unlike their familiar cousins, they don't have intermittent yellow blinks. These dark fireflies are tiny, about the size of a black grain of rice. They "float" close to the ground, in huge numbers. Their lights do not blink, but are steady, lasting up to a full minute and instead of yellow, they have an eerie blue glow to them, hence their common name, Blue Ghost Fireflies. My first thought upon seeing them was "Fairies... and they are carrying tiny blue lanterns." Blue Ghosts are so rare, Don went for 10 years not knowing what species they were, until finally an expert heard his story and eagerly came to identify the tiny firefly. Now, entomologists come from all over to see the rare phenomenon. Don keeps careful watch over his fireflies, and no one has more direct observation of this species than he. He began by only inviting friends to come see, but saw the need to widen the viewing audience after Bennie Lee's death, and now holds open house. I can't imagine a better way for him to honor and remember Bennie Lee than by sharing this magic.
The Blue Ghosts are only around for four to six weeks--sometimes even less, usually appearing around April 15th. Some nights, and some years, are better than others, with the moon, humidity, wind, and temperature all affecting the numbers. The best year ever, according to Don was 1975. There were billions. Another observer in Tennessee that year reported there were so many lights that her horse became confused and tried to step on top of the blanket of light. The fireflies appear after it is totally dark, with 9:00 seeming to be their magic hour. You will not see many if the moon is shining and wind or rain will send them to the ground for shelter. If you go, and numbers are low, give it another try. It will be worth it. If you get there early, you will probably be able to meet and talk to Don, an experience in itself. Forget pictures, as the lights mysteriously defy being accurately photographed or videotaped, even though many experts have tried. I have talked with people who have observed the fireflies in one of their other spots in Dupont Forest. Though nice, they say it doesn't compare to the experience with Don, where it is quiet, and you are free to walk and explore on your own. If you choose one of the log benches Don has set up at the base of a wooded slope, the blanket of tiny lights seems to envelope you as they glide down the hill. It is almost like a waterfall of tiny lights. On a good night, it is a vision that almost defies belief. That is why this blog is named Blue Ghost firefly, because observing them on good nights were moments as good as any I have ever had, moments shared with the people I love, celebrating the mystery and beauty of the ordinary, transitory and overlooked. It gave meaning to the statement by Einstein that "the most beautiful experience we can have is the mysterious, the fundamental emotion which stands at the cradle of true art and true science." Don will send me an e-mail when the fireflies appear. I will make the trip again this year and will welcome company. In the words of Don's friend "you have got to come out here and see this."
Don has made sure the fragile fireflies will be protected on his property which has the delicate balance they need. The female firefly has no wings, so if her environment is destroyed, she has nowhere to go. He has granted a conservation easement to protect the property from development and has also started a nonprofit organization, Friends of Firefly Forest, to see that the legacy he has tended to over the last 35 years will continue... and the property will be dedicated to them, even after he is gone.
Thank-you Don. 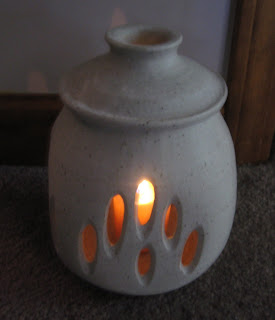 A piece of pottery I bought from Don Lewis' gallery on my first visit to his property. His workmanship is superb. I choose this lantern for its unusual grayish white color and the cut-outs which always remind me of the the blue ghosts. 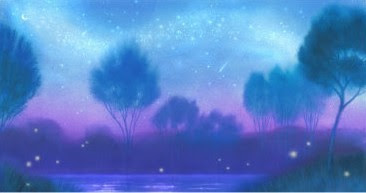 Address to Wildwood Gallery and the fireflies is : 120 Ryan Drive, Cleveland SC.
Donations may be made to Friends of Firefly Forest at P.O. Box 345, Cleveland, SC 29635